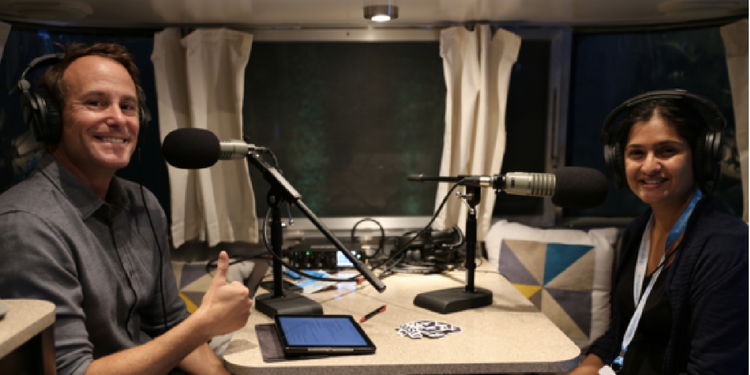 Jason Lemkin, the founder of SaaStr, interviewed Wootric CEO and cofounder Deepa Subramanian at Dreamforce 2016, getting her thoughts on best practices for Net Promoter Score for startups and learning how – in two short years – she grew the NPS platform she built herself into a runaway success with users in 75 countries around the world. Listen to the podcast:

Here are highlights from the interview.

How Deepa built Wootric from code to customers

Jason: Deepa, tell us about what Wootric does, how big you are, and any other core metrics.

Deepa: Well, to give you some context, I was a very early engineer at Salesforce, starting in 2003, and it’s been kind of a wild ride since. I went to law school. I practiced law for a bit. I ran Schmendricks bagels, my first foray into entrepreneurship.

But my true passion is technology so this is where we are. Wootric is a Net Promoter Score tracking platform that helps companies boost customer happiness. This is what we are today. But what we really want to bring to businesses is intelligent turn-key customer feedback management that helps them align the entire company around the customer and customer experience metrics. Like NPS.

Deepa: That I could do it. I mean, I built Wootric, just me.

Deepa: In this universe, with AWS and Heroku, my first six months of MVP cost me nothing. I was able to manage the entire stack — whereas when I joined Salesforce, I think we were over a 100-person company. You needed 11 developers and a whole infrastructure team.

Jason: So you built the prototype, or even version one, all by yourself in six months?

Deepa: It had actually been about 10 years since I coded, so what I did was work for two weeks with a consulting company called Thoughtbot, where we peer programmed the MVP, and then I took it on.

Jason: So that de-rustified you. And then you brought on the rest of the founding team?

Deepa: Jessica Pfeifer is actually a very old friend of mine. She is a brand marketer, most recently at Clorox. But I knew that before Harvard Business School she had been a marketing consultant in China running what were basically customer experience survey programs.

I did a user interview with Jess at her kitchen table, and it was so productive and so exciting that I said, “Jess — you need to come work with me. How do I convince you?” She’s one of those people who goes by her gut, and she said, “I’m going to do this with you.”

Jason: When did you decide to expand the team? Was it when you got your first paying customers?

Deepa: I think it was after we raised our first round of financing.

Jason: Well that certainly helps, to pay their salaries. And how much did you raise?

Deepa: Jessica and I raised $2.5M from Cloud Apps Capital and others.

Jason:  Just the two of  you? That’s pretty badass. It’s certainly a testament to you. Did you have paying customers yet?

Jason: What did they say they loved about Wootric that helped convince your investors?

Deepa: Two things. First, the end-user survey experience. I think they thought this was so unique, since NPS products tended to focus on the experience of the person giving the survey.  The other thing was that it took them just a few minutes to install. Which for the enterprises we were talking to – they had never seen anything like that.

Jason: This makes me curious, and I’d like to back up for just a moment. How did you get the first 10 customers? Where did they come from?

Jason:  If the first 10 customers were hustle, where did customers 11-100 come from?

Deepa: All inbound.  We have this viral component–people saw the survey. They loved it, and they were, like, “Who is this?” And they clicked on the “powered by Wootric” in the survey. So, the next big five customers came in virally. Today, we have over 100 paying customers. It’s been a third virality, a third content marketing, and a third partnerships.

Basically, what I’ve learned is if you want a repeatable, scalable outbound sales model you need to have sales professionals come in. We’ve now brought on two AE’s and these are very unique individuals. They’re good at what they do, but they’re very creative. They know that this is not something that’s been figured out already and they’re ready to listen, give me feedback, work on this model. One of them has a strong B2C Rolodex, and he understands brands really well. The other is much more experienced selling to SaaS companies, B2B organizations.

Jason: Okay, let’s shift the conversation to talk a little bit about NPS. Let me start with the transformation in my thinking. I used to hate NPS, and here’s why. My experience working with NPS at a Fortune 500 company was that it was an excuse for mediocrity. You could have a stale product that was no longer competitive in the market, but your existing customers loved it because they were used to it. Thus, you could see very high scores in very mediocre products. That turned me off.

Then I started to work with a few dozen SaaS companies and they all tracked NPS early. At that point, I saw the magic, and now I am a big proponent. So, what’s changed NPS? Maybe I’m viewing it wrongly, but I think there’s almost been a revolution how people think about it.

Deepa: NPS used to be looked at a vanity metric, but now people have realized the power of using this as a period-to-period key performance indicator (KPI). That’s when it becomes really powerful. Companies have also come to realize that NPS is not a program that you run once a year, or once every six months. You want to incorporate it into your ongoing reporting. Also, people have realized that the data is applicable across the organization, beyond just Insights or Marketing.

Setting up an NPS program? Get the ebook, The Modern Guide to Winning Customers with Net Promoter Score. Leverage customer feedback to drive growth with a real-time approach to NPS.

Jason: Should NPS be one of the top 5 or 6 metrics for the whole company?

Deepa: Absolutely. It should be a board metric.

Jason: Everyone in the company should be responsible for NPS.

Don’t be spammy about NPS surveys

Jason: Some folks get worried, especially if they haven’t done NPS before, that they’ll annoy their customers if they ask them for too much too often. And I know if you use something like Wootric, the bar is very low. It only takes 60 seconds or 30 seconds. But should I be worried about asking for too much feedback from customers?

Deepa: Absolutely, you can’t be spammy about surveys. Wootric’s so end-user focused–very careful about right question, right time, right customer, right device. And all of this needs to be coordinated. If you have the resources to do it yourself by all means do it. But Wootric can do all that for you.

Jason: How often can I survey my customers, at least for NPS, without asking too often? What’s the right cadence?

Deepa: It really depends on the business. Let’s take a SaaS company for example. If your customers are engaging pretty frequently in your products, I would say once every three months. But what you want to do with that is get a statistical sample. You want to smooth out the collection so that you’re talking to everyone over the course of that three-six month period.

What about segmenting NPS by user group?

Jason: How much should I segment my NPS by customer base?

Deepa: It kind of depends on the size of your user base. That said, segmentation is really useful. If we’re talking about SaaS companies, you want to know how your enterprise base is doing, versus your plus level customers, and so on.

Jason: If you segment between small, medium and large you’re often going to see very different data in those segments, right?

Deepa: Absolutely. But if you don’t have statistical numbers in each of those groups, then your score is just going to be noise [focus instead on the qualitative feedback you are getting.] So you need to think about how big is each user base and whether the numbers are actually significant.

What if I have a low Net Promoter Score?

Jason: Here’s another high level NPS question. What if my NPS is low, say ten or worse?

Deepa: Do not fixate on a low score number. Just worry about moving it and worry about the trend. Your customers are giving you feedback. Take that input, and do everything you can to drive up your score.

Jason: Do you think there are certain industries or verticals that inherently have lower NPS than others?

Deepa: Providing a good user experience is definitely more challenging in some industries. Airlines come to mind. But I don’t want to demotivate any company at the outset. You have to start somewhere. If you don’t measure it, you can’t improve it.

Jason: If my NPS is lower than I like, how much can I change it in one period of time? What’s a reasonable expectation? Let’s say I’m at 20, and I want to be at 40. What’s the right goal, and how quickly can I expect results?

Deepa: I think the right goal is a couple of percentage points every period. You know, maybe one period is one quarter, maybe a period is six months.

But what you actually want to see more is different signifiers, not just the score moving up. For instance, how many passives, which are basically low hanging fruit, have I moved over to promoters. Or how many detractors have I gotten to be passives? How many have I rescued from churning? You do want to move the score a couple of points up, but you really want to dig in a little bit more and have tangible shifts that will lead to score increases.

Jason: Let me ask you one more tough question. What should my NPS goal be for the end of next year? For example, if I’m 20, should I aim for 50 percent improvement next year? If I’m already high – if I’m 60 or 70 – should I aim to maintain it, or go even higher?

Deepa: The goal is the same regardless of the number, to get those promoters to give you the referrals. Get those passives to love you. Get those detractors not to churn. That said, if you trust your program, a concrete goal to strive for would be to get it up every single period by a couple percentage points.

Jason: Okay, here’s my last question. I want to implement NPS today. I’m busy, I’m tired, I have a lot going on, but I’m excited, and I want to get started. How do I do this with Wootric?

Deepa: If you’re a web application, you need to install one piece of Java Script, just like Google Analytics. If you have a mobile app, it’s a SDK. If you want to use email, you can do that with us as well.

Jason: Okay, so one line of code or some email addresses, and I can get started…Wootric helps me select the right cadence and the right amount of times to hit everybody?

Deepa: We come out with defaults and you can just go with that. But if you want, our customer success team will step in and advise you.

This interview was edited for space and clarity.  Special thanks to the team at Salesforce for Startups.