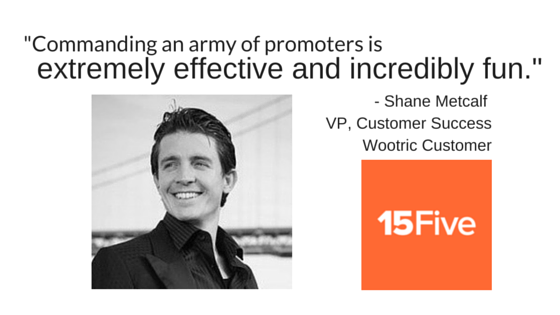 Goal: Mint promoters! Ensure customers are delighted with 15Five and eager to spread the word.

15Five is a provider of a SaaS product that aims to create more effective communication between employees and management. The product works by having employees check in once a week to take a 15-minute survey, with the employee’s manager spending about five minutes to review the answers—hence the name 15Five.

David Hassell, the CEO of 15Five, was told by an advisor very early in the history of 15Five that one of his most important jobs as founder was to “mint promoters”; that is, to identify customers that are so pleased with the product that they’re willing to spread the word, and then empower them to do so.  According to James Allen in Forbes, in an article by Bain & Company, promoters tend to spend more with a business, stay with it for longer and often cost less to serve. Their lifetime value, therefore, is usually several times higher than those customers who are neutral, let alone detractors.

As a start-up in the early stages of development, David knew that getting highly satisfied customers to spread the word was one of the best and most cost-effective growth strategies available to 15Five.

This meant 15Five needed a way to quantify their level of customer satisfaction and track it constantly.

Shane Metcalf, VP of Customer Success at 15Five, recognized  Net Promoter Score data as a good method of identifying promoters. He was drawn to the single question NPS survey as a lean tool for classifying users as promoters, passives or detractors, and gathering actionable product feedback from all three groups. Shane spent about a year reviewing some of the available solutions for collecting NPS data. Unfortunately, many of the NPS solutions on offer left something to be desired.  “Most of the NPS solutions we looked at were email-based,” said Shane. “We already send out a lot of email to our customers, and we know their inboxes are very crowded as it is. We know that customers might start ignoring our emails if we send too many. So, we also wanted to make sure we ask our question in a way that it’s likely to be answered.”

Since the company depends on direct question-and-answer interaction between users, they understand how important it is to ask the right question at the right time, and to ask a question in a context where the answers are likely to provide useful insights. When Shane came across the Wootric in-app NPS platform, the first thing that made it stand out was the fact that it was not an email-based tool; instead, it integrated directly into the 15Five product interface and delivered tremendous response rates. And, “the Wootric NPS survey has a very modern look and feel to it. It’s something that I’m very happy to have in our product, as I think it reflects well on us and our brand.”

Results: An Army of Promoters, and more on the way…

Wootric now helps 15Five meet one of their most important goals — minting promoters — while also setting them up for success in other key areas.

15Five set up Wootric up so that a percentage of 15Five customers are being surveyed at all times. This “drip NPS” provides a the high velocity feedback loop and a constant stream of data.  As a result, 15Five now gets NPS data that they can feel confident is an on-going pulse of customer sentiment.

“We track, report, and share our NPS results every week using Wootric,” said David. “I like getting the constant stream of feedback, and we don’t even have to worry about initiating it because it’s automatically going on in the background of our product. I tell other startups that NPS surveying is something they absolutely must do, and I recommend Wootric to do it, because it just works. “

Knowing who the promoters are is one important part of the equation, but it’s just a start. Fortunately, 15Five is able to integrate their NPS data with Intercom, their customer support platform, to help put those promoters into action once they’ve been identified.  “One of the things we love about Wootric’s Intercom integration is the ability to communicate with customers by NPS segment,” Shane said. “We were featured on a major startup website a while back, and it was like I was commanding an army of promoters to spread the word and get people interested in reading the story. I started by notifying the 10s, then I sent in the 9s, then I unleashed the 8s…It was a extremely effective and incredibly fun.”

In addition to hearing from their most ardent supporters, David and Shane also value the opportunity to gather constructive criticism when customers feel that the 15Five product is not living up to expectations. To date, this has helped them to validate components of their product roadmap, and drive greater customer satisfaction.  As a result, 15Five has been able to increase its NPS by 14 points.

“Not all detractor feedback is helpful, but Wootric helps us aggregate and make sense of the constructive criticism we get,” said David. “For instance, a consistent point of feedback from unhappy users was that they were tired of the answering the same questions each week. Refreshing the question rotation was on our roadmap, so this validated that addressing this was worthy of product team resources. The product team then automated a new question rotation to address this ‘question fatigue’ issue.”

David and Shane were recently tested when a competitor knocked off the 15Five business model, right down to the tag line. David’s gracious response on Medium garnered over a 1000 ♥s  and over 100 comments from promoters near and far expressing support for 15Five and its product. That buzz of online engagement — a visible manifestation of customer love — is a testament to the culture that 15Five has created. Customer happiness is in 15Five’s DNA, and that is something far more difficult to replicate than a business model.